Herman Studio was founded in 2012 by the two architects, Helle Herman Mortensen and Jonas Herman Pedersen. Their work spans from textile, ceramics, lighting and furniture design to interior design. A characterstic feature of their design is their focus on the objects’ contours. By working with a distinctive outline for each object, the craftsmanship allows the design to stand out whilst remaining simple and readily recognizable. Their great passion for design and their appreciation of aesthetic principles are complimentary to their use of traditional materials and methods. They work in an iterative process between sketches, models and prototypes. Their design process begins with the detailed study of construction methods, an approach which plays a central role throughout the design process. The workshop is therefore an essential part of their studio. 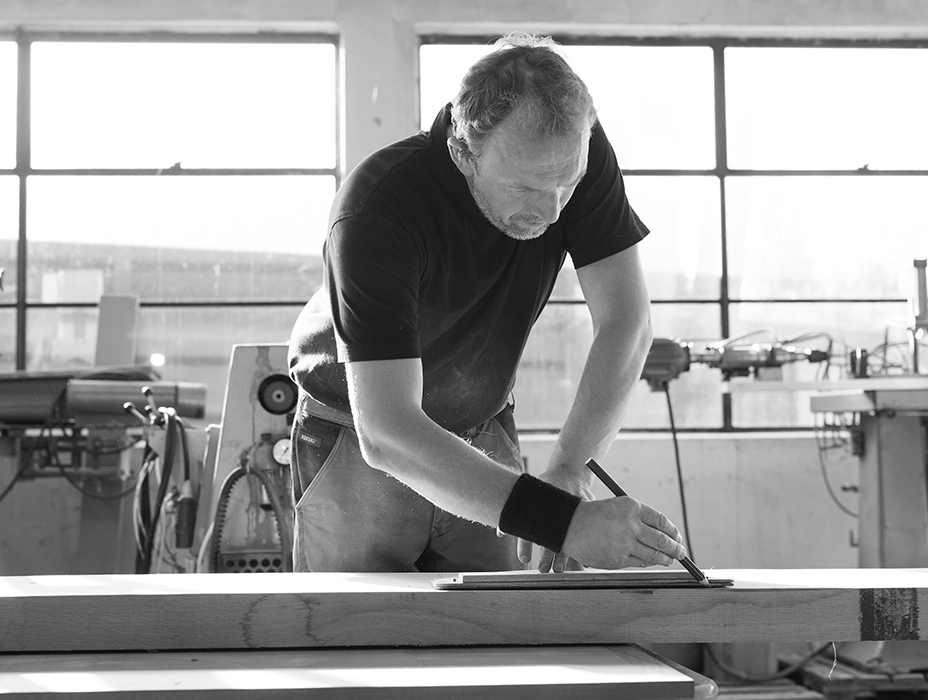 The design of the Shoemaker Chair dates back to 1936 in Odense, Denmark. In the 1970s, the design was affiliated and assimilated by the Werner family who come from a long line of fine wood turners; a profession almost non-existent today. Over three generations the family have renewed and finetuned the Shoemaker Chair and reestablished the design and production to where it is today - a true archetypal classic. They have tirelessly optimized the chair over the years, adjusting minor aspects of the production flow and the finished product. For example, the T legs were added for extra stability and the seat re-shaped and rounded to offer greater protection to the topline in case the chair falls. On the island of Funen, The Werner Family worked from the woodturning joinery Gislev Drejerforretning, founded in 1913. The third Generation of the Werner Family is still part of the joinery. So, the designer and the woodturner are still one and the same.

Finnish-born designer Jonas Lutz began studying design in Turku, Finland, and continued at the renowned Malmstens Linköping University in the outskirts of Stockholm in Sweden. He finished his studies with an exchange to Eindhoven, Netherlands. Despite travelling further from home, Nordic design traditions remain embedded within his work. In 2016, Jonas began focusing on his own work from a light-filled studio in one of the oldest harbors in Rotterdam, Netherlands. Lutz creates objects of bold and ingenious simplicity which are inviting to touch. The foundation of his form language lies in a deep understanding of the inherent qualities of materials and the production process. Elegant solutions are visible in the way parts intersect to form a unity, projecting both subtlety and strength. Jonas finds inspiration in Nordic furniture traditions as well as in the lively design culture of his adopted city of Rotterdam. “It’s never been a question of whether or not to make something, it’s just a natural thing for me”.